Lehi, the first prophet in the Book of Mormon, was warned by the Lord that Jerusalem would soon be destroyed and was told to leave into the wilderness. While in the wilderness, Lehi had a peculiar dream.

In his dream, Lehi found himself in a dark and dreary wilderness.  He saw a man in a white robe standing in front of him who told Lehi to follow him.  Lehi was soon lost, however, and traveled alone for many hours.  He was no doubt tired and afraid of not knowing where to go, so he prayed for comfort. No sooner had he prayed, when we saw that he was in a large and spacious field and he saw a tree whose fruit was desirable to make one happy. He saw that the tree and its fruit were whiter than anything he had seen before and the taste of the fruit was sweet and gave him great joy.

The joy and sweetness of the fruit gave him the desire to share with those he loved most: his family.  As he looked around, he saw that a river ran by the tree.  He soon saw his wife and youngest two sons, Nephi and Sam, far off, and that they too seemed to be lost.  Lehi called to them and they came and also ate the fruit.  Wanting his older two sons, Laman and Lemuel, to be there too, he looked farther up the river.  When he saw them, he called out to them, but they would not come.

Alongside the river, an iron rod stretched from the tree off into the distance by where the river began.  That large field now seemed to be as large as a world, and it was filled with countless people that were trying to get to the tree.  A mist then covered the whole area so that the people could not see.  This caused many to wander off and become lost but others held the iron rod in their hands and followed it until they reached the tree. There were some who made it to the tree but when when they ate the fruit, they looked around and were ashamed. Lehi looked for the cause of this shame and saw a large building that looked like it was floating in the air. The people in that building were all dressed in extravagant clothing and were pointing fingers and mocking those by the tree.  Lehi watched and saw people get lost in the mist and others drown in the river; many followed the iron rod to the tree and the rest found their way to the large building to join the others in mocking and putting down those by the tree. 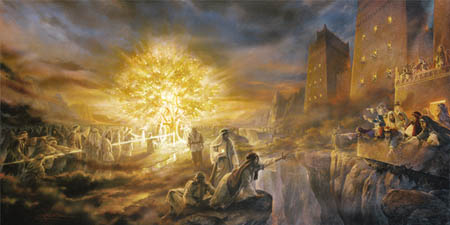 The meaning of this dream may not be immediately clear to everyone. It wasn’t to Lehi’s son, Nephi, but Nephi had enough faith that God would answer his prayers, so he took his questions to the Lord in prayer. In response to that prayer, Nephi also had a vision, where he saw the meaning of the dream and of Jesus Christ’s mission on earth and His love and gospel.  He learned that the tree represents the love of God for us. The iron rod that led to the tree was the word of God, given through His prophets and that if we held onto those words, we would find the love of God and receive joy because of it. The people in the dream are each one of us, trying to find our way through the mists of temptations to reach God’s love. Many people fail to grasp the words of the Lord and get lost or drown in the filthy waters that represented that “awful hell that separates the wicked from the tree of life.” The large building that held those that opposed God represented the wisdom and pride of the world.  Nephi saw its destruction and “the fall thereof was exceedingly great.”

The meaning of this dream applies to every person that has ever lived on this earth.  Each of us is trying to get somewhere, even if we do not know where.  What we seek is Christ and His love for us.  By holding onto the iron rod, or rather, by reading scriptures and praying to God, everyone can receive Christ in their lives regardless of the obstacles.

Lehi’s dream can be found in 1 Nephi 8 and Nephi’s vision in 1 Nephi 11. Nephi sees much more than this and I invite everyone to read about it in chapters 12 – 14. In 1 Nephi 15, Nephi explains the meaning of the dream to his older brothers, Laman and Lemuel.