What is it that makes us different? Why do Mormon missionaries knock on the doors of Christians if they preach the gospel of Christ? It is more than a desire to gather sheep into our flavor of worship.

Since the Garden of Eden the Lord has given us instructions on what we ought to spend our time doing in life. His pattern is to choose a mortal man, call him a prophet, and dispense the information through him. He needs two things: access to truth and authority (priesthood) to preach it. It’s simple and efficient. At least, it is when the people listen to him.

Invariably, the backlash against the prophet leads to a revolt against him and against God. When the prophet is killed, the dispensing of gospel truth is thwarted and the people are left in the dark. We Mormons call this “apostasy.” Fortunately, the Lord has always followed apostasy with a new prophet and a new dispensation, beginning with Adam, then Noah, Abraham, Moses, and Elijah, etc.

Case in point: John the Baptist was called as a prophet to prepare the way for Jesus’ ministry. He and Jesus taught the gospel truth, restored the priesthood power, and organized the Church of Jesus Christ. Jesus called Peter and the other apostles to lead the flock after His departure.

Up to this point you probably feel comfortable. Here comes the primary theological difference between Mormons and most other Christians:

John the Baptist was beheaded, Christ was crucified, and the apostles were rejected and murdered. They who held the authority of the Lord were eliminated and the world became apostate again. This time it lasted for over a millennium, allowing a smattering of false teachings from non-prophet church leaders to creep in.

Reformers such as Martin Luther, John Wycliffe, Roger Williams, and others saw problems in the religions of their days; they did their best to correct them, but lacked the capacity (and the authority) to fully revert to Christ’s original church. They could not authoritatively speak for God, since he had not spoken to them or given them permission, and many of these reformers recognized that fact.

This dark apostasy came to its end when a young man of 14 years prayed in seclusion in a grove of trees in 1820. Joseph Smith was looking for the true church. Not a nice church, or a charismatic church, or a ceremonial church, but the church that God himself directed. As he searched the Bible he read,

“If any of you lack wisdom, let him ask of God, that giveth to all men liberally, and upbraideth not; and it shall be given him.” James 1:5

He felt that if anyone lacked wisdom he did, for what to do he did not know. And unless he could gain more wisdom he would never know. In a grove of trees near his country farmhouse, he knelt and prayed. In his words:

“I saw a pillar of light exactly over my head, above the brightness of the sun, which descended gradually until it fell upon me… 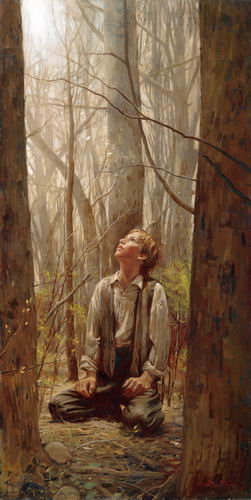 “When the light rested upon me I saw two Personages, whose brightness and glory defy all description, standing above me in the air. One of them spake unto me, calling me by name and said, pointing to the other—This is My Beloved Son. Hear Him!

“My object in going to inquire of the Lord was to know which of all the sects was right, that I might know which to join. No sooner, therefore, did I get possession of myself, so as to be able to speak, than I asked the Personages who stood above me in the light, which of all the sects was right…—and which I should join.” Joseph Smith-History 1:16-18

Joseph received an answer from the lips of the Savior himself: That his Church was in apostasy. There were no prophets on the earth and there hadn’t been for over a thousand years.

However, even in these demoralizing words was a message of hope: the apostasy was now broken, and Joseph was receiving direct communication from God. Over the course of Joseph’s life, he was visited by the Lord, and also by other angelic messengers, many more times. He was chosen to be a prophet and through these visitations the priesthood authority was restored. The church was reorganized upon the foundation of apostles and prophets.

Now, we carry this amazing message of hope to all nations of the earth. We are honest in our desire for others to know that the Lord’s work is restored. His successor, Thomas Monson, is the living prophet today. We know it, and we want you to know it too.

God knows whether this is all true, and I daresay he has an opinion on the matter. Ask him yourself. I have, and so have millions of now-Mormons. You may not receive as glorious a visitation as Joseph did, but he will answer you. Often it comes as a feeling from the Holy Ghost, or an idea you hadn’t thought of. Maybe in a word from a neighbor. Ask and ye shall receive. If you won’t ask, you don’t receive.