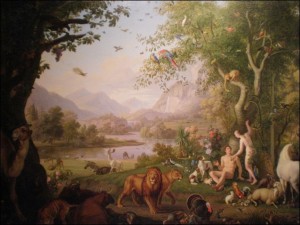 In terms of doctrinal subjects, the case of Adam and Eve can be one of the more difficult to explain and understand.  The Biblical story can seem confusing.  I have found myself in the past studying this complex and important part of the Plan of Salvation because I plainly did not understand it.  The ‘whys’ didn’t seem to line up.  But with some time, I began to understand the importance and need for this event.

Before the fall, there was the creation of Earth.  Before that, there was a council.  Our Heavenly Father presented a plan for us to progress from our spiritual state to one where we could be like Him.  For this to be accomplished, we needed to come to Earth and gain a body, experience life, and learn to use the agency given us to submit our will to His through doing all that he would command us to do (Abraham 3:24-25).  This plan encompassed all these things.  God knew what would happen on Earth.  He knew that Adam and Eve would eat the forbidden fruit and would have to leave His presence, He knew of wars among His children, He knew of the pain and suffering they would pass through and He knew that left alone, His children could never return to Him.  That is precisely why the Atonement of Jesus Christ is the key part of this plan.  God planned that once the fall of Adam and Eve occurred, He would teach them about the Atonement so that they could live and grow in spite of being separated from God.

Once all the future of the Earth was planned according to God’s power, He sent His son, Jesus Christ, to create the Earth.  And create it, He did (Ephesians 3:9).  He created it beautifully and perfectly and placed the plants, animals, and man there.  Once Adam and Eve were there, God commanded them to “be fruitful, and multiply, and replenish the earth and subdue it” (Genesis 1:28).  Furthermore, they were told that they could eat of any plant or tree in the Garden of Eden, except the tree of the knowledge of good and evil.  God told them that if they were to eat of this tree that they would die (Moses 3:17), however He gave to them agency and expressly told them that it was given to them to choose.  Adam and Eve lived in the Garden of Eden in a state of innocence, not knowing good or evil, nor did they know what happiness or sadness were (Moses 5:11). They existed, and little more.

The book of Moses tells us that Satan did not know the mind of God (Moses 4:6) and wanted to destroy God’s plan for his children.  Through a serpent, he told Eve that she ought to eat of the fruit of the tree of knowledge of good and evil so that her eyes could be opened, to know good from evil (Moses 4:11).  Now, eating this fruit was something that God had warned them against because of the consequences.  Eating this fruit would cause them to become mortal and therefore imperfect.  They would eventually die.  Mortal man, stained with his own sins, cannot withstand the presence of God in a permanent setting, so this also separated them from God.  God never allows us to make decisions that separate us from Him without first warning us, hence the commandment He gave Adam and Eve.

Eve saw that the result of knowing good from evil was indeed a desirable thing so being deceived by Satan, she ate the fruit.  As evidenced by Adam’s confession to God a few verses later (Moses 4:18, Genesis 3:12), Adam was commanded to remain with Eve.  Once Eve had eaten the fruit, Adam saw that he must either partake of the fruit or be separated from Eve.  It is a good thing that he chose the first or none of us would be here.

Adam and Eve’s world changed then.  It no longer was a paradise that grew all sorts of foods without effort.  It became a place where Adam and Eve had to work to live.  Aside from being a reference to the separation of God from the world, it provided an environment where mankind had to work, be humble towards God and rely on His mercies.  According to the plan, Adam learned the gospel of Jesus Christ and knew that the Atonement was coming.  He taught his children this truth and rejoiced in the knowledge of his Lord and Savior.

While the Fall of Adam and Eve may seem like a tragic event, it isn’t.  It’s true that they transgressed the commandments of God, but that event provided an opportunity for all of the spirit children of God to come to a place to receive a body and have the opportunity to become like God himself if they chose to do so.  Even though Adam and Eve disobeyed, God is merciful.  He provided a way for them to be forgiven of that transgression through His Son–the only sinless person who has or ever will live on this earth.  Likewise, all of the posterity of Adam and Eve, us, have claim upon this wonderful opportunity of forgiveness of sin through Jesus Christ if we will choose to receive it into our lives.