Q. Do Mormons believe in the Old Testament?

Yes, we do believe in the Old Testament.  The Old Testament is full of symbolism and prophecies that support the New Testament’s testimony of Jesus Christ and point to our days as well.  It may be difficult to understand at times, but with careful study, the whole of the Bible has been a wonderful source of inspiration in my life.  It has a long history of inspiration and continues to inspire people today.  I’d like to address a bit of its history and content as well as what we believe concerning the Bible.

The Bible (from the Greek biblia, meaning “books”) is a collection of writings by many authors collected and compiled over the course of a many centuries.  The two parts, the Old and New Testaments, are separate and distinct from one another.  The Old Testament is comprised of histories and personal writings of prophets and the New Testament is a collection of some of the writings of early Christian leaders.  A prophet of the Old Testament such as Isaiah, for example, would have a vision, write it down and it would be eventually compiled with his other writings.  Isaiah had a vision of the throne of God and His glory which became Isaiah chapter 6.  Isaiah had many visions, teachings and life experiences, some of which make up the 66 chapters in his book in the Bible.  Jeremiah had his visions and teachings as did Ezekiel, Amos, Habakkuk, Nahum, Malachi and other inspired men, including prophets mentioned in the Bible whose books are not available to us.  All of those teachings were given to the people living at the time for the purpose of reminding them of the Lord their God.  As often as they forgot, the Lord sent prophets to remind them of His will toward them.  This was usually to persuade the people to abandon the worship of false gods and return to obedience and service to the only true and living God. 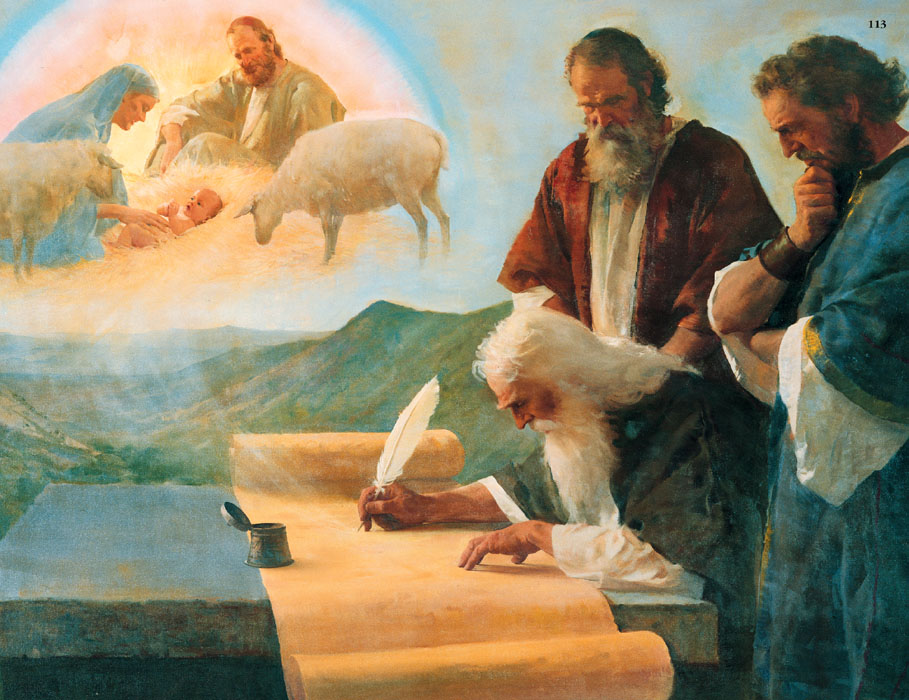 The New Testament picks up chronologically over 400 years after the last prophet of the Old Testament, Malachi.  It begins with a book written by a man named Matthew, whom we later learn to be an apostle personally chosen by Jesus.  Matthew gives us his testimony concerning the gospel (a word meaning “good news,” which is the good news of Christ’s atonement) and the coming of Jesus Christ, His ministry, teachings and death.  Matthew quotes scripture from the Old Testament many times to support his testimony that Jesus was truly the Messiah and Savior of all mankind.  The next book, authored by Mark, offers another testimony of the same Jesus Christ.  As does Luke and also John, the beloved.  Those four books make up everything we know about the life and ministry of the mortal Jesus Christ and they are all testimonies of His divinity, His life and His Atonement.  After the book of Acts, which tells a small amount about the early church and the missionary effort put forth by those early Christians, we have a collection of letters sent by church leaders, mostly Paul, to the scattered congregations.  The last book, Revelation or Apocalypse, is a vision received and recorded by John.  All these testimonies, books and letters, as well as many others that existed then, were circulating among the people.  Which of these documents were valid and doctrine were defined to be canon around the fourth century A.D., leading to the particular collection we have today.

Is the Bible itself perfect?  Unfortunately, no.  There are many variations and translations of the Bible, some of which are vastly different from others.  And if it were perfect, wouldn’t we all understand it to mean the same thing?  How could there be so many different opinions on what the truth of God really is?  This is precisely why God did not cease with revelation.  He did not give up on us.

So then, what is the Bible?  In a nutshell, it is the testimony of prophets among the Jewish people.  It is a record.  It is a description of Jesus Christ and a testimony that He is the way to eternal life.  It describes a perfect being, His perfect gospel and His perfect way.  All the prophets since Adam have given their testimonies concerning Christ and His gospel.  To receive anyone’s testimony of Christ is surely a great blessing.  The Book of Mormon is also a blessing like that.  It is another such description or testimony of Christ written by prophets not among the Jews, but among other peoples across the world.  With both the Bible and the Book of Mormon, we can gather a clearer image of what the Lord truly desires of us.