Q. I was reading 1 Ne 4:13 last night and have a question. “Killing in the name of religion” is a popular topic amongst religious naysayers. This verse talks about how God only commands killing with the “kill one, save a thousand” mentality. Did God only command this in Bible & Book of Mormon days, or does he still do it now? If not, why? Why not for 9/11? My question is… what’s the answer to someone who fires in at me with, “Thou shalt not kill!? Such hypocrisy! More killing has been done in the name of religion than anywhere else.” – Molly M.

This is a good question. Molly, thank you for bringing it up. I’ll quote the verse you mentioned:

13 Behold the Lord slayeth the wicked to bring forth his righteous purposes. It is better that one man should perish than that a nation should dwindle and perish in unbelief. 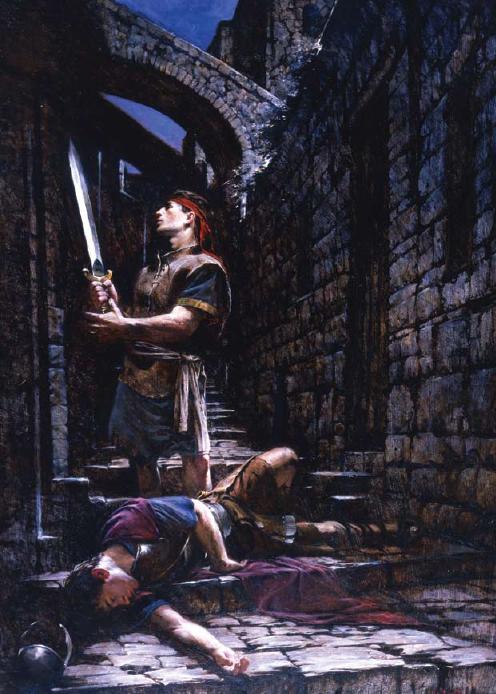 In this chapter the Lord commands Nephi to slay Laban to obtain the brass plates (basically the Old Testament up to that point in time — approx. 600 B.C.), so Nephi’s descendants would have the Law of Moses. But why kill Laban? He was passed out in the gutter; Nephi might have taken his clothes and his sword and left the drunk tyrant naked in the street. The short answer is ‘because God commanded it.’ I’ll get to a plausible long answer in a moment.

God’s view is much different than ours. “For my thoughts are not your thoughts, neither are your ways my ways, saith the Lord” (Isaiah 55:8-9). Jesus Christ can see into eternity. He knows each of us by name, by face, and by who we are and what we will become. Any time He issues a command, it is with infinite foresight (see D&C 29:34), and with the intent to help and protect His sons and daughters (see Moses 1:39). On rare occasions this might mean dispatching one of His children for the greater good of many. We must remember that to Him, death is not the end of anyone. Laban lives on as a spirit, and perhaps this is for his ultimate betterment.

Has God ever issued such a command in modern times? Not to my knowledge, and it would surprise me if He did. John Welch writes in Legal Perspectives on the Slaying of Laban that Nephi was justified under Jewish law (as set forth in the Torah) to take Laban’s life. The Spirit’s persistent whisper of “the Lord hath delivered him into thy hands” is a nearly verbatim quote from Exodus 21:13, which outlines an exception to “Thou shalt not kill” in the previous chapter. Since we are now subject to different laws, and God has encouraged us to abide by the laws of man (see Articles of Faith 12), it is unlikely He will command it. (But I can never rule it out).

But doesn’t that possibility open the floodgates for villains to falsely claim divinely inspired violent crimes? Yes. Unfortunately, Satan and his followers have the uncanny ability to twist true, godly practices toward their own ends. We can avoid being deceived by receiving the Holy Ghost and praying for the gift of discernment. This is yet another important reason to be baptized by the water and the Spirit.

So what do we say to the charge that religion causes widespread death and dying? Yes. Religion has done some of that, but not all religions are owned and operated by God (see above paragraph). It is just as careless to say that all foods cause obesity or the internet is basically pornographic. Just because many religions have bloodied their hands, does not imply that God’s are stained. The instances in which God has legitimately called for mortals to put someone to death are few and far between. They get written up in scripture mainly because of their highly exceptional status. “Thou shalt not kill” remains the rule in full force for Jews, and Christians alike.

But religion is not even nearly the biggest culprit when it comes to rampant killing. “More killing has been done in the name of religion than anything else” is one of the most absurd claims ever made. Sure, it’s easy to see, particularly in light of the conflict in the middle east, that leaders sometimes use religion as a way to inspire people to mindlessly kill others (maybe with promises of a glorious afterlife). But leaders act for political reasons, and they will use anything to inspire the masses to war. Sometimes it’s religion (crusades, jihads), but more often it’s nationalism or race or political ideology with the exact same result.

You don’t even need to look outside of the 20th century to see that the most brutal killing has nothing to do with religion. There are three leaders that are far and away responsible for the most deaths in human history. They are (in order) Mao Tse Tung, Joseph Stalin, and Adolf Hitler. All three were atheists who promoted atheist regimes, and who are responsible for about 100 million deaths among the three of them. After them come Pol Pot in Cambodia, Kim Il Sung in North Korea, Menghistu in Ethiopia, and Kambanda in Rwanda. The claim that “more killing has been done in the name of religion than anything else” is patently false. If anything, it’s just the opposite.

Now, for the long answer. (Yeah, turns out my short answer got pretty long).

God is not the only one to employ the “kill one, save a thousand” mentality. That doctrine is used by almost every head of state. This is the basis for life sentences and capital punishment, as well as sending soldiers to war to protect the freedom of civilians at home. Making such decisions is difficult for leaders, especially those who govern responsibly. This concept becomes even more important in light of Nephi’s intended audience. First Nephi, along with the next five books of the Book of Mormon come to us unabridged, and (in contrast to Mormon’s writings, which were for our benefit) were likely also written for the Nephite people.

Nephi was their first king, and a revered one at that. He wrote the book of First Nephi as a narrative of his rise to the throne. Val Larsen, a contributor to FARMS, wrote an amazing paper detailing this take on the scripture called, Killing Laban: The Birth of Sovereignty in the Nephite Constitutional Order. It is worth reading. Before discovering it (in researching this question), I naïvely thought I understood the Book of Mormon pretty well, but this is a testament to me that there is always more to learn.