Q. I am a non-member of the Church of Jesus Christ of Latter-day Saints but looking into it. I was wondering: I’m on birth control for regulation of the menstrual cycle. What is the belief Mormons have on this?

The official church stance on birth control is that this is a decision to be made solely between husband, wife and the Lord. We believe that children are a wonderful blessing and that the commandment God gave to Adam and Eve to multiply and replenish the earth is still in force today. Husband and wife are encouraged to ponder the blessing that children bring and take the decision to God in prayer.

Members are reminded that finances, schooling and other worldly concerns are not God’s concerns. Sometimes faith is required when the world would say, “That doesn’t seem wise, considering your circumstances.” I have known couples who have waited to begin their families until their positions become more secure and I have known couples who have started their families despite many secular obstacles. It is not the position of any outsider to make a judgment on such a private, individual matter. What is right for one couple may not be right for another.

Sexual intimacy brings new life into the world, but that is not its sole purpose. God intends sexual relations also to be an expression of love between husband and wife, an important part of a loving, faithful, flourishing marriage.

Most people tend to view life after death in the simple terms of heaven and hell. There is a place for the good people and a place for the bad people. In my last post, Life After Death Part 1, I explained that there is a temporary state between death and resurrection where everyone will be placed in prison or paradise. However, after resurrection (after Judgment Day), our eternal existence is somewhat more complex.

In 1832, Joseph Smith and Sidney Rigdon had been studying the bible and thinking.  Joseph wrote that they came to a realization: “It appeared self-evident from what truths were left, that if God rewarded every one according to the deeds done in the body, the term ‘Heaven,’ as intended for the Saints’ eternal home, must include more kingdoms than one.” (Preface to Doctrine & Covenants 76, see also John 5:29) Subsequently, they beheld a vision in which the three degrees of glory were revealed to them. (Doctrine & Covenants 76) 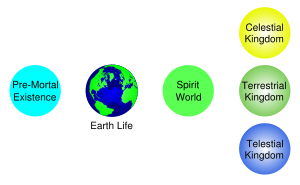 Reserved for the most wicked is what is known as Outer Darkness. Those that will be cast into outer darkness and eternal damnation are those who deny the Holy Ghost. They are called “Sons of perdition” and this is not a title I would consider lightly. I do not believe it belongs to your “average” sinner. These are the baddest of the bad; they know the goodness of God and still choose to rebel.

Those in the Telestial Kingdom do not accept Christ as the Savior in this world or the Spirit World. I would say these are “bad” people. As verse 103 says, “These are they who are liars, and sorcerers, and adulterers, and whoremongers, and whosoever loves and makes a lie.”
Those in the Terrestrial Kingdom are good, decent people: people who are half-hearted, or complacent in their testimony. They are described as “honorable men of the earth who were blinded” and “not valiant in the testimony of Jesus.” (D&C 76:75,79) 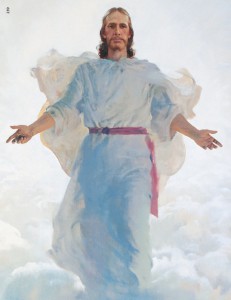 Those in the Celestial Kingdom are those who accept Christ as the Savior, those who are faithful in their testimony and continuously strive to do the will of the Lord. These are those who endure to the end and follow Christ’s admonition to “be ye therefore perfect, even as your Father which is in Heaven is perfect” (Matt. 5:48) This is the goal to strive for and it requires a life of faith, obedience, and dedication as we grow into the divine role for which we are intended.

I believe the things we should take from this knowledge are: 1) God has a plan, and 2) While it is a simple plan, it accommodates the complexities and ranges of His children and their faithfulness. We will be rewarded according to our steadfastness in keeping our covenants as we attain our divine potential.

See “The Plan of Salvation” 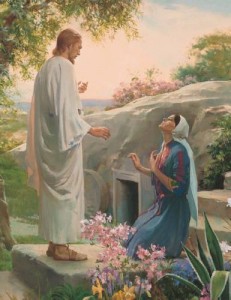 First of all, I hope everyone had a happy Easter!

Recently, there have been a number of articles posted here referring to our eternal nature and I think it’s time we discussed this. So, what do Mormons believe about the afterlife?

We believe, as do other Christians, that Christ died and three days later was resurrected. He overcame death and because He rose again, all mankind is freed from the bondage of death. Regardless of age, race, gender, religious beliefs, good actions or bad actions, everyone will be reunited with their bodies at the time of the resurrection, after Christ’s second coming.

Dale C. Mouritsen explained, “Peter refers to the spirit world as “prison,” and it is for some. (1 Pet. 3:18–20, 1 Pet. 4:6.) However, it is chiefly a place of learning and waiting, not a place of suffering. Here, those who did not have an opportunity in mortality to receive the gospel and those who had a partial opportunity but rejected it will be taught.” However, for those in spirit paradise, the spirit world will be a place of great activity as they will be the ones on whom the responsibility falls to spread the gospel message. There is much work to be done there!

For further reading, I recommend the following excellent articles:

“The Plan of Salvation”

Some find the doctrines relating to works and grace to be an intimidating topic in the world of religion, particularly as it relates to the LDS faith. It needn’t be. It is a simple doctrine.

We do not believe, as some do, that Christ’s grace will save us independently of our actions.  His sacrifice on the cross did not eliminate our personal responsibility. That is not to say that His grace is not sufficient for all, because it is. However, were we saved by grace alone, what would be the point in living a lifestyle of obedience and sacrifice? We could do whatever we desired and still obtain salvation by accepting Christ. Yet God requires that His followers obey Him, whether or not we know (or understand) His reasoning.

The problem here is that we simply cannot be perfectly obedient. Only the Savior could fulfill the demands of justice and be perfectly compliant with the Father’s will. That is why works alone will not suffice. None of us would be able to achieve the expectations placed before us by only our own efforts. We are all dependent on Christ for our salvation. Thus, we need His grace. And we need repentance. We must do our part, which consists of both continuous efforts for improvement and proper repentance.

Let me share part of the explanation from the Bible dictionary:

“It is . . . through the grace of the Lord that individuals, through faith in the atonement of Jesus Christ and repentance of their sins, receive strength and assistance to do good works that they otherwise would not be able to maintain if left to their own means. This grace is an enabling power that allows men and women to lay hold on eternal life and exaltation after they have expended their own best efforts.

Divine grace is needed by every soul in consequence of the fall of Adam and also because of man’s weaknesses and shortcomings. However, grace cannot suffice without total effort on the part of the recipient.”

Christ invites all men to “Come unto me . . . and I will give you rest . . . For my yoke is easy, and my burden is light” (Matt. 11:28,30) But we must first come; He will not simply bestow His lighter burden on all. We must first knock in order to enter in to His rest. We need both to act and accept His divine grace.

Suggested readings on this topic: