Q. Why do we have illnesses and disabilities? How is this part of God’s plan? 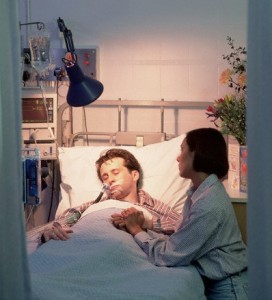 I’ve been asked to address this issue, which was quite timely as I have been sick for over 2 months with some form of lung infection. It left me rather listless and weak. I hope that this will invoke more of a discussion rather than be viewed as the definitive answer. Why illness? – is a major issue that most religions have had to deal with: the fact that bad things happen is explained in various ways. The Taoists suggest that the opposition of Yin and Yang are what maintain a balance in the universe. The Hindu have a similar take with their idea of Karma. Many Christian faiths look at the misadventure in the Garden of Eden kind of like the opening of Pandora’s Box in Greek Mythology which released all that was bad into the world.

The LDS belief goes back a bit before the earth was formed and recognizes that there was spirit life in the pre-earth life and that these spirits had free will or moral agency. Agency to believe and to act is an enormous power, a power that can help us progress but also a power that can damn progression if poor choices are made. The first insight into the use of our agency as spirits was at a council held in heaven.

There was a disagreement about how the earth plan should operate: Lucifer wanted to take peoples’ agency away, and ensure that everyone would return to heaven–and he also wanted the glory for doing so. Jesus agreed with the Father’s plan that agency would be allowed and then volunteered to be the sacrificial lamb. One third of the hosts of heaven wanted the assurance which Satan proposed and followed him. They were expelled from heaven and forfeited the opportunity to receive a physical body. The rest of us accepted the Father’s plan which would allow all men to come back to God if they accepted Jesus and obeyed the commandments. They would receive bodies, learn to use their bodies to progress further and be resurrected with glorified bodies like our Father’s.

When Adam and Eve were created, the Tree of the knowledge of Good and Evil was made available along with a warning from the Father that they shouldn’t partake of the fruit. Satan beguiled the woman and she ate, followed by Adam eating of the fruit. God then expelled them into the world of hard knocks but with a knowledge of good and evil, an understanding that all things have their opposites and that choices are possible.

Obviously nobody chooses to get sick, yet people make choices that not only affect themselves but often affect many other people as well. Let’s look at an easy one:  the recent AIDS epidemic. There are various theories of how that disease was introduced to the human race from animals. If some better choices had been made perhaps the disease wouldn’t have made the leap to humans. Its spread through bodily fluids can be controlled in most cases. So in the U.S. with a fairly small infected population a person can take precautions to keep himself free of the disease. In Botswana where 60% of the population is infected it is much more difficult: some children are even born with the disease. One might say that the individual baby had no choice and is being punished unjustly. From our earthly perspective that looks right, but our perspective is limited to this life and the assumption that living long and healthy is the ideal.

In John 9 Jesus comes upon a man born blind. His disciples ask him, “Master, who did sin, this man, or his parents, that he was born blind?” Jesus replied that neither sinned but that the man was put there for the glory of God to be manifest. The disciples had the short perspective in this case assuming that since all sin is punished with suffering, all suffering was the result of sin; but there was a larger perspective which they hadn’t considered.

Job provides 39 chapters of argument about whether Job was guilty of sin which would help his friends explain the troubles that had befallen him. Finally even Job begins to fall into his friends’ way of thinking and questions the Lord. Chapter 40 is the Lord’s response which starts with the question: “Wilt thou also disannul my judgement? Wilt thou condemn me, that thou mayest be righteous?” He goes on to express the majesty and power of the Lord, pointing out the limited view that mankind has of the creations of heaven.

The LDS perspective on why illness and pain exist is that it is part of earth-life challenges. It helps us appreciate the good when we have experienced the bad. Some choices can be made to reduce illness in our lives but sometimes the illness is part of the curriculum of heaven to teach us lessons we might not otherwise get. The question might not be why there is illness, but rather how we handle the adversity.