I met a man once who thought that baptism was a good idea, but not necessary for salvation. He suggested it was sufficient just to “believe in Jesus,” and you’ll be fine. And then there are some others who say that once you’re baptized you’re good to go (to heaven, that is).

Mere belief (which is a much smaller thing than faith), is like believing that a college can make you an attorney. It can. Your belief is right, but there’s still the matter of being accepted. Getting baptized, and baptized properly, is like the ACT or the SAT. And as any attorney can tell you, getting into college is not the same thing as getting out.

The purpose of college, like the purpose of life, is to emerge from the struggle a different, better person. Sure, you could theoretically learn everything a lawyer or a doctor knows through diligent, independent study at a local library. But there are at least two problems with this:

1) Do you really think you’ll study as hard if you never commit to it? Will you push yourself to learn the integumentary system if you aren’t in classes and there are no final exams?

2) Who will hire you? Your knowledge and experience may be high, but your sheepskin is still unofficial and unauthorized.

Now, this is just a simple analogy, but it helps get the point across. Baptism is a rebirth; a new starting point, and for most people it is the disposal of a sinful life in favor of one devoted to God and to godly living. It exhibits your commitment to Jesus Christ, both in His eyes and in yours. 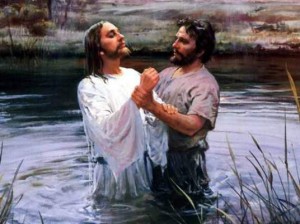 Just like in the SATs, you aren’t allowed to cheat, either. The exam must be proctored by a testing official appointed by the head of the testing organization. Similarly, baptism must be administered by a person who holds the authority to act in behalf of God. This is why people went to John the Baptist. He had the Levitical priesthood.

Baptism is a requirement for salvation. Consider the baptism of Jesus Himself. He was not turning from a life of sin, nor committing Himself to follow His own path. He had two reasons for doing it: 1) because it is a required step to salvation for all people and 2) to show us how important it is. (see Book of Mormon: 2 Nephi 31:9)