About 4,000 years ago, the Lord made a covenant with a shepherd named Abram. He promised Abram that he would have a particular land to live on, that he would have posterity as numerous as the stars in the sky and the sand on the seashore, and that through him the nations of the earth would be blessed. In order to get these great blessings, Abram had to carry the gospel to the earth through bearing the priesthood of God, and live righteously. 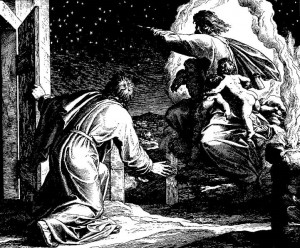 So Abram agreed to this covenant (of course), and his name was changed to Abraham. Eventually he had a son named Isaac and the Lord renewed this same covenant with Isaac—he would inherit the land promised to his father, he would have children as numerous as the sands of the sea and through him would come salvation for the earth. Isaac also received the Priesthood and the commission to preach the gospel. He had twin sons, Esau and Jacob, and the covenant was renewed with Jacob. Finally, with Jacob we see some major posterity. He had 12 sons and one daughter. His sons were Reuben, Judah, Dan, Naphtali, Gad, Simeon, Levi, Zebulun, Issachar, Asher, Joseph and Benjamin. Each of these sons bore lots of children, and they had children and they had children (as it always happens) and eventually they were so numerous that the Egyptians enslaved them to keep them from taking control of the kingdom. So this is where Moses comes in, and he leads them out of Egypt to “the promised land”, as in the land promised to their fathers.

Eventually, the children of Israel were separated, and then scattered. They drifted into anonymity through intermarriages, and abandonment of their traditions and religion. The house of Judah stayed pretty cohesive and defined by their covenant, which is why the Jews are known as a chosen people. But Judah was only one of the 12 brothers—the people of Joseph, of Dan, Levi, Asher, etc. are all “chosen” as well. (When we talk of being “chosen” we are talking of their great potential because of the covenant made with their ancestors–not that they are automatically saved).

This covenant really drives the Old Testament narrative. God promised this group of people some special blessings if they remain faithful to Him. He followed through with His promise throughout the generations. We believe that He continues to seek out the children of the House of Israel. Even if they don’t know who they are, He does, and His promise is just as valid with them as it was with the descendants of Israel in Moses’ time. The earth is literally swarming with Israelites, and they have the promise of eternal blessings – land, posterity and priesthood power.

We don’t all need to move to the land of Canaan to claim our blessings, of course (there are enough people claiming it right now anyway, so stay put). This covenant extends into the next life. We are promised a place in heaven (land), an eternal increase of spiritual children (posterity), and priesthood power to act in God’s name. We are promised Eternal Life, or life like God and with God. What we have to do in return is live righteously and spread the gospel throughout the world.

So how does the LDS church figure in to this narrative? We’re the last chapter. Our missionaries are working all over the world sharing the gospel, teaching and baptizing people who are inheritors of this covenant. This is the spiritual gathering of Israel—they reconnect with God through the covenants of baptism and the ordinances of the temple. God knows who they are and where they are, and even if a person isn’t a direct descendant of Israel, if they accept the covenant, they are adopted into the house of Israel as if they had been born there.

So, are you a member of the house of Israel? You probably are. God has some special blessings ready for you if you want them. To find out about making covenants with God, contact your local LDS missionaries (or let them in the door when they come around…)