This is the final part in summarizing the Book of Mormon.  Part 1 and Part 2 are also available to read.

By 1AD, most of the people described in the Book of Mormon did not believe in Jesus Christ nor His prophets.  One of those prophets named Samuel prophesied  boldly on the city walls of the signs of Christ’s birth and death (Helaman 14).  On the night that Christ was born into the world, an irrefutable sign was given.  A day, a night, and a day became one continuous day without darkness.  This was to the relief of the believers and utter astonishment to the rest. 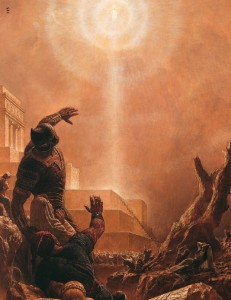 It didn’t take long for people to forget about the sign and continue life normally.  More wars happened, particularly against the now very large society of robbers, and around 30AD, just as Christ was beginning His earthly ministry among the Jews, the entire Nephite government was overthrown and the people divided into tribal states.  Then, three years later, one the greatest events of the Book of Mormon began to occur.  At the time of Jesus Christ’s death on the cross of Calvary, Samuel’s prophecy of storms, earthquakes and destruction did indeed happen.  Cities were leveled, burned, buried, and sunk into the ocean.  Darkness covered the land for three whole days (3 Nephi 8).

After the three days, Christ’s voice was heard by the survivors.  He was calling them to Him and lamenting their destruction.  Of all events told in this book, what happened next far outshines the rest.  Christ, Himself, descended from Heaven and proclaimed His divinity.  He had drunk the bitter cup and glorified the Father.  He taught the people, blessed them and healed them.  For several days, He did so.  I would encourage all to read even just a few of these passages from 3 Nephi 11 to 28.  Before He left, He chose twelve men to teach and guide the people in His absence.

Then, for two hundred years, there was peace.  After three hundred years, however, the people had digressed so far from Jesus Christ and his Gospel, that civilization had degenerated to a state of total war.  The final prophets of God among the people, Mormon and his son Moroni, were left to witness the decay of their once great civilization into war and disorder.  It was during this time that Mormon took all the historical records of his people and compiled them into a single history so that it could be available to us.

A final battle between Nephites and Lamanites took place.  During this battle nearly all of the Nephites were killed.  The only Nephite we know of surviving, other than those that joined the Lamanites, was Moroni.  For many years, Moroni carried the record his father had made and wandered.  During this time, Moroni completed his father’s work by summarizing the record of the Jaredite people whose records had been found early in Nephite history.  The Jaredites were brought to the same land as the Nephites by the Lord somewhere around 2500BC, when the language of the people was corrupted at the tower of Babel.  They crossed the ocean and lived for many centuries of alternating periods of righteousness and wickedness until finally they refused to repent and were destroyed as a society.

After finishing the story of the Jaredites, Moroni then buried the record, written on plates made of gold, on a small hill in upstate New York, now called the Hill Cumorah.  1500 years later, he appeared as an angel to the boy Joseph Smith and directed him to where the plates were buried.  They were found, translated, published and have been printed for the past 179 years as the Book of Mormon–Another Testament of Jesus Christ. 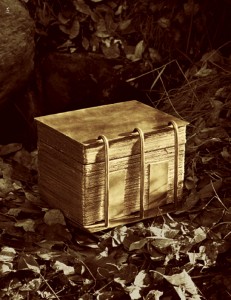 The Book of Mormon continues to be a guide to everyone who reads it.  Just before Moroni buried the plates in the ground, he wrote a promise to anyone who would read the book.  He promised us that when we read and ponder on the things of the book, and ask God in the name of Christ, then we will know the truth of it by the power of the Holy Ghost.  This is an extraordinary promise and one that has been tested and tried by millions of people.  It is my invitation that you do the same.  Read a portion of the Book of Mormon and ask God to know for yourself.  I know of myself the truth of this book and know that you can know as well.